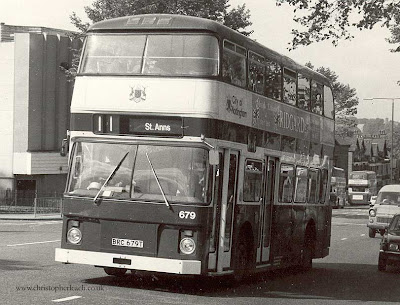 An unmistakable Nottingham Leyland Atlantean with it's own custom built Northern Counties bodywork climbs into the city on the wide derby Road through Lenton with two similar buses heading out of town during the Eighties. I would have been working when I took this shot but whereas it's often difficult to park legally in the City, further out one is often afforded convenient restriction-free side streets or even an hour or two's free parking and either I could walk back or just pause. Ten minutes though was usually enough for me if I wasn't somewhere a bit special, and I must have liked this spot as I took some nearby quite recently which I will also post. I've had to alter this post as a viewer pointed out that I had made some location errors, it's amazing how the memory plays tricks over time.
Posted by christopher at 14:43

I like the picture and as a longtime Lenton resident I used the old route 11 on countless occasions. However, you might like to amend your caption. The bus is heading towards the City Centre, then onto St Ann's, via the Derby Road in Lenton. Behind the 11 and across the road you catch a glimpse of the Savoy Cinema, which is still going strong.

Sorry Robert, I'm on the wrong side of the road but at least I got the Lenton bit right. I remember now I did cross over. When I used to deliver to the knitwear firms I had one in Lenton and I think it was Alfred Martin. Always a good spot to stop Notts, Barton and Trent.