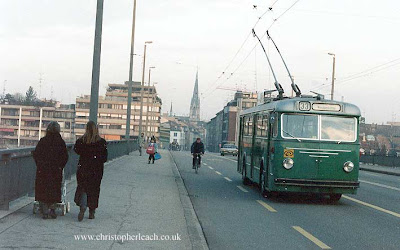 Today trolleybus operation finally comes to an end in Basel which is rather sad as Switzerland with it's mountains to create hydro-electricity was always regarded as a natural home for these clean silent user-friendly vehicles. Just a few years ago Lugano closed down it's four routes that operated on a twelve-minute frequency, and I don't know whether it happened or not but the comparatively small Schaffhausen system offering a bus every ten-minutes dating from 1966 like Basel was always under threat. Way back early in January 1990 very old machines were still hard at work in Basel and I expect they were there when I made a school visit in 1964. If I guess and say they were built by FBW someone will correct me so instead I will just add that the trolleybus routes didn't penetrate the centre of the city or go close to the main railway station but Route 33 crossed the Rhine to the wrong side closer to the German Border where there is the Badische Bahnhof.
Posted by christopher at 02:16

These pictures are much appreciated. Thank you for marking this event in such a fitting way.

The FBW bis in the top picture actually dates from 1956. The last of these survived in service until 1995, after almost 40 years of unblemished service. Some were even sold for further service in Ruse (Bulgaria) but doubt that any survive there. Number 358 was retained in Basel as a heritage vehicle, but with the passing of the trolleybus system it's future would seem somewhat bleak.

Again, thank you for your efforts. They are much appreciated!