Back to School? School Rocks! 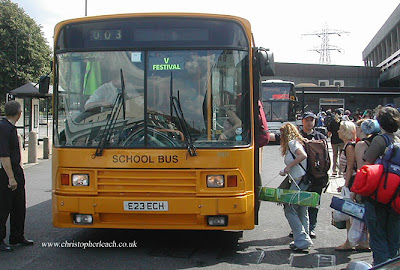 Well no actually. This in bus terms is the most exciting week-end of the year when the town of Stafford gets invaded by strange buses taking the young back-packers to the Weston Park Rock Festival. Last year WM did the contact employing most delicious old Metrobuses but on previous occasions the contract went to Arriva. This major contract meant it was all hands to the pumps and even the Boss had to take the wheel, and for his pains they made sure he got to worst bus! It was a an Alexander PS bodied Scania K92, one of six that came to Arriva with Derby City Transport in 1988 Nos.21-26. It is quite a feat too as not only is there a continuous feeder service from Stafford a similar operation occurs outside Wolverhampton Station too. Last year this event was so well supported not only were local main roads on the Staffordshire-Shropshire border gridlocked on the Friday even the M6 motorway came to a standstill with the congestion caused as people tried to make their exit on to the A5 which passes the venue.
Posted by christopher at 00:52