Basel 2000: The last of FBW Trolleybuses 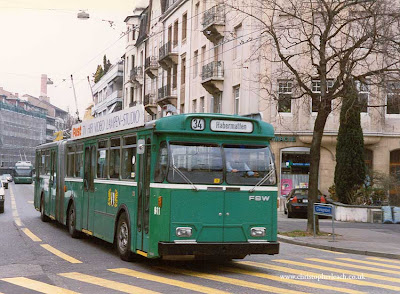 In 2000 Basel Route 34 was converted to motorbus operation and out went these 1975 Hess/SAAS bodied FBW machines and the pair of Mercedes-Benz-Gelenkobusse 921-922. In the distance is one of the final generation of trolleybuses delivered between 1992-1996, 923-934 built by Neoplan which continued to work on routes 31 and 34.
Posted by christopher at 01:34