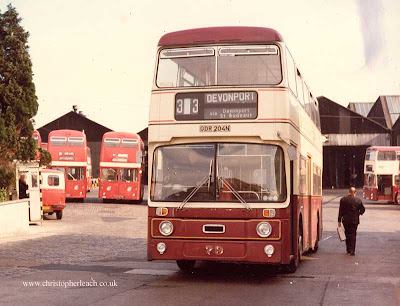 Plymouth Corporation painted Park-Royal Leyland Atlantean No.79 like this to celebrate it's anniversary and in a simplified form it became the fleet standard for a time in the Eighties. I was lucky enough to get around the depot that Sunday as they were obviously in a good mood that day. The Milehouse Depot showed more links with it's 100 year heritage as not only did these modern buses sit on Victorian cobble-stone sets there was still evidence of the system's tram rails.
Posted by christopher at 15:38