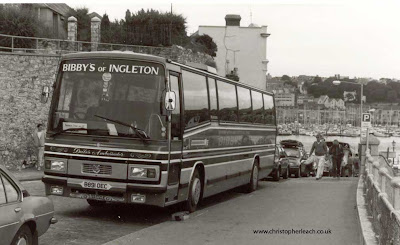 As well as the big names some smaller Independents became well know too as they had a good Summer tours programme which meant that their coaches could be seen far and wide. Amongst the regular visitors to Plymouth and the West Country was Bibby of Ingleton whose rather ornate livery had a hint of the Gypsy caravan about it. When new in 1984 this Plaxton 3500 bodied Leyland Tiger was christened Dales Ambassador but it's predominantly grey livery seemed to echo the Devon skies here at Plymouth Hoe in this scene taken at the end of the Eighties..
Posted by christopher at 11:14