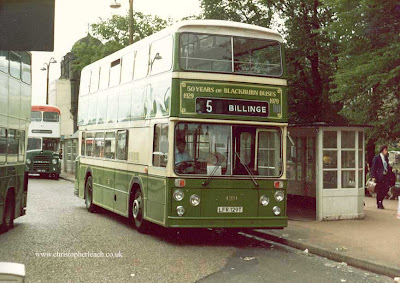 When this Leyland Atlantean with an East Lancs body arrived in 1979 it was painted in a livery similar to that used fifty years previously on Blackburn Corporation buses. As happened elsewhere people realised it was so attractive compared to the drab Seventies red white and green then in use and it became the new norm albeit in a simplified application. Behind is a 1962Leyland PD2 which hardly surprisingly was also bodied by East Lancashire Coachbuilders as the factory was in the town.
Posted by christopher at 11:11