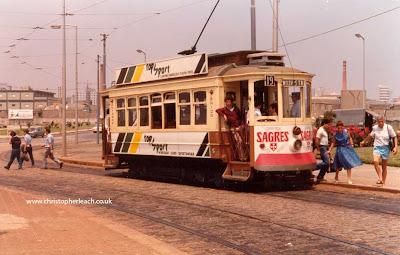 I shouldn't have to write captions for images like this one from 1984 as they are enjoyable enough as they are. Sadly I have a book of Portuguese Trams so I can show off a bit of my knowledge. This series of trams numbered between 150-199 were built between 1912 but later examples from the class like No.193 dated from the Thirties and weighed 11.71 tonnes. The genteel charm of this wonderful tram contrasts with the rather uninspiring world of Porto's industrial sprawl of sun baked concrete and brick.
Posted by christopher at 07:13