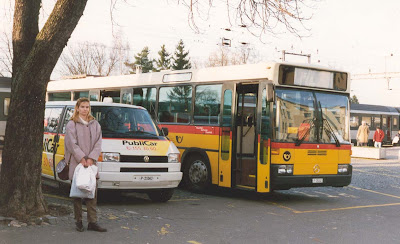 Traditionally in Switzerland Post Buses parked in an easy welcoming fashion close to the trains but by the time I stopped going they moved them further back maybe showing their diminished national icon status. With about twelve vehicles the early-Nineties Frauenfeld PTT bus fleet comprised almost solely of these standard Mercedes-Benz 0405 buses but there was also a MAN midi-bus and later as elsewhere the odd dial a ride 'PubliCar' minibus arrived on the scene too. I'm a bit of nostalgia fan and after looking at some early Post-War photos of the very different bonneted Saurers taken on this spot I'm pleased to say that at least this tree that cast shade over them still looks just the same.
Posted by christopher at 15:52