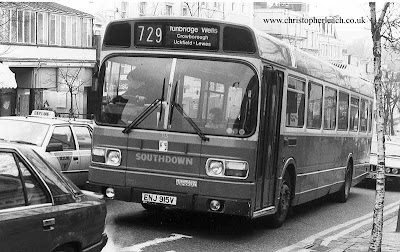 Like most towns in Britain it can be almost literally blue murder with all the standing vehicle fumes being belched out in the rush-hour and especially on murky wintry evenings such as here in the late Eighties when Southdown Leyland National 115 was stuck in the traffic making it's own little contribution. The 729 ' Regency Route' was a limited-stop service between Tunbridge Wells and Brighton worked jointly by Maidstone and District and Southdown like the old 119 and 122 which it partly replaced. It's a pity this photo wasn't taken in colour for at least the reborn privatised Southdown buses bore a more cheerful livery based on it's old apple-green and cream.
Posted by christopher at 07:04