West Bromwich might not look much but it's buses had colour 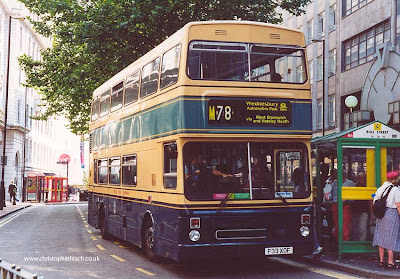 Fortunately even the most hard-nosed unsentimental of the big bus groups see the PR benefits of painting buses in commemorative liveries. But National Express owners of WM ( The former West Midlands PTA) did a cracking job when they painted mostly Metrobuses in the colours of it's former Municipal members Birmingham, Coventry, Walsall, Wolverhampton and this the lovingly recreated elaborate West Bromwich. It's a pity when about half a dozen birmingham buses received the treatment it's other big constituent, a hefty chunk of the once very important Midland Red didn't get it's nostalgic bus for photographers to catch as it ground to a halt at all the wretched lights on the Birmingham to Wolverhampton, New Road but by this time there were none of the old Midland Red Garages left on the system to operate it from except of course Digbeth Coach Station which was being used by Midland Red West. West Bromwich is a poor district on the edge of Birmingham and once very much a part of the Black Country with it's over-riding industrial drabness but once like the football club gave the town's fleet of individualistic traditionally liveried buses a little more to be proud of than the smaller neighbours.
Posted by christopher at 04:45