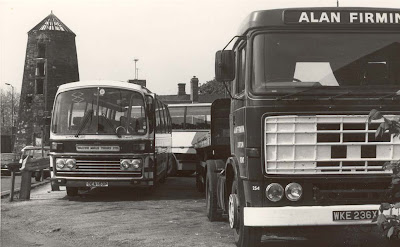 I'm absolutely certain far more people will be familiar with the haulier Alan Firmin of Linton whose lorries are a familiar sight in the maidstone and Ashford area than that of Walter Mills Tours also seen in this picture. I'm sure too Alan Firmin whose royal-blue AEC lorries carried cherished number-plates with the initials AF is still operating as I saw one not too long ago on the M6 but as you can see by the 1980's it's lorries had come down in the world and now just carried ordinary Kent Registrations, but at least it was nice to see it was still running British built wagons like this ERF. Walter Mills on the other hand only operated seven vehicles from it's Himley Road Garage premises in Gornal Wood including this Plaxton Panorama bodied Ford R11114 delivered new in 1976 in the companies crimson and cream colours. The Broad Eye Lorry and Coach Park in Stafford was full that day as teachers from all over Staffordshire visited the county town as part of some industrial action. Is Walter Mills still operating? Well I will know tomorrow as John one of the drivers I talk to on my school run knew and seems to have worked for all these small Black-Country firms like Hazeldene, Fred Winkle, Colletts, or the bigger Don Everall.
Posted by christopher at 14:49