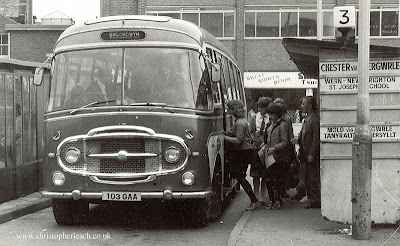 To the outsider at least the featureless North Wales town of Wrexham is as unexciting as the name suggests, a mixture of light industry and farmer's market town plus a sprawling untidy mining past too. But before it was moved to the more important Chester the headquarters and birthplace of the once mighty Crosville was here and during the heyday of the Sixties it's legacy could be seen in the shape of the largest garage allocation with 128 vehicles. But even though Crosville was the only major operator in the town it was also served by a number of small Independent Operators including Edwards of Bwlchgwyn who operated this Plaxton bodied Bedford SB5 which was new to Barfoot of Southampton in 1963.
Posted by christopher at 16:08