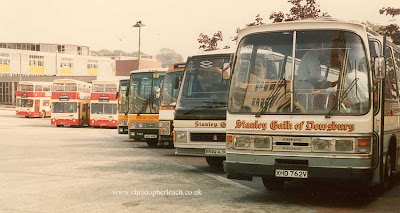 One of the pleasures of the busy Bretonside Bus Station in Plymouth was the hordes of visiting coaches because any holiday in Torbay or tour of Devon and Cornwall wasn't complete without a visit to Plymouth and it's Naval Dockyard. You can almost hear the screeching seagulls overhead excited at the prospect of maybe a discarded half-eaten sandwich or making a mess on my head as I record two Stanley Gath Coaches taking a break. The second in the line-up with a Duple Lasar body is a DAF but most of the vehicles in this view including the Van-Hool bodied Shearings are Leylands. Bath in the Sixties together with Bristols of course there was almost nothing else to see in this city in the way of buses but today with the exception of the odd elderly First Group Olympian one would be hard pressed to see even a Leyland in Plymouth, and also vanished is the rounded structure at the far end of the bus station which on the upper level once housed a petrol filling station. Even though the bus station whose dark gloomy covered public areas lie beneath the road have been revamped following a murder down there of a vagrant, now that not many coaches visit here means it is still despite a modest face-lift not the place one once loved so much as an enthusiast.
Posted by christopher at 03:03