Midland Red: Ghosts of the Past 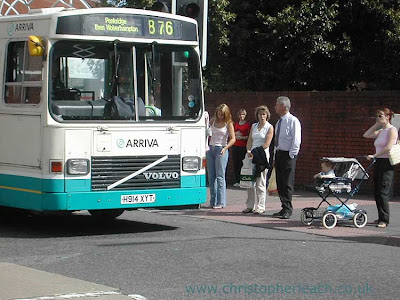 Maybe there are always too many changes or time travels just too fast but as far as the bus scene is concerned too many good things get swept away for ever. Once Stafford was the northern outpost of the giant Midland Red which famously operated 1900 buses and coaches mostly of it's own manufacture. Almost nothing remains as a reminder of this great company in Stafford as even the old concrete bus stop poles are slowly being replaced by new metal ones as often kerb sides are raised at the same time to enable wheelchair access on the new generation wheelchair friendly buses. Worse still not only was arson suspected when the Pilgrim Street garage was gutted and many of the buses destroyed but the company at the time, British Bus tried to blame it on aggrieved bus-spotters who had been turned away. But there is one reminder that keeps those glory days alive and that is the Midland Red Stafford out-of-town area route numbers went from 823-875. The last mentioned the 875 went from Stafford to Penkridge and when the Birmingham-Dudley-Wolverhampton-Stafford 196 route was cut in the middle at Wolverhampton at the end of the Sixties so this end could be worked by Wolverhampton Garage as a single-deck OPO service it made sense to give it 876. I've heard new Scania buses are earmarked for this service so like the routes from Cannock not long ago christened 874-5 but since revamped with new buses as the 74-75, no doubt the 876 will become 76. The routes out to the Heywoods, Uttoxeter and Hixon still carry 841-842 but they are not originals either as this work came with Stevenson's and Staffordian in the Nineties As a final twist, in this view taken about six years ago of East-Lancs bodied H914 XYT , this bus came from Cowie's Grey Green the small London company that was the tiny acorn that grew into the huge Arriva.
Posted by christopher at 07:43