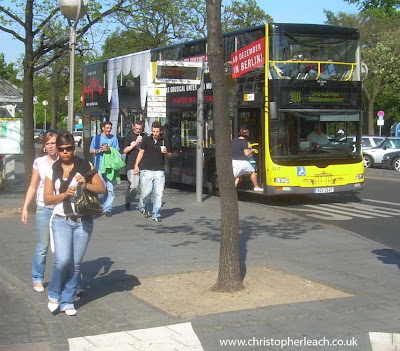 I seem to dwell rather more on the past than the present which seems a bit silly really as I take some fine digital photographs and this good one has sat in the files for over one year already. I'm not so bus-mad any more so the poor old bus usually is more of an excuse to do some photography rather than an end in itself. But I'm sure you'll agree there are occasions when I get the balance between the composition, vehicles and human interest just right. Linking the Zoo Bahnhof in the old West Berlin, The Reichstag, Unter-den-Linden and Alexander Platz the tourist favourite 100 Bus Route naturally plays host to the newest double-deck buses which always seem to be full. Still if you are like me you might prefer to stand around a bit longer as an older bus might well come along as they do. So far there are 200 of these new air-conditioned MAN buses which BVG call the Lion with another 200 to follow. Fleet numbers start at 3099 and sadly they will eventually see off all the other double-deck buses but at least there will still be top-deck rides for some years to come on the city's busiest routes.
Posted by christopher at 15:38