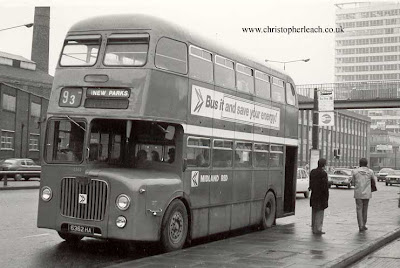 I like to make my submissions match the day somehow whether it be the weather, at the weekend, a holiday or somewhere I've just been. This week has been horribly wet and were one to see one of Midland Red's few surviving D9's busily working away in Leicester at the end of the Seventies one would have certainly been cheered. Most of the various former BET Group operators buses looked rather depressing in the rather unimaginative toy-town NBC colours imposed on them after Nationalisation but somehow the old BMMO's of the Birmingham company had enough home-spun character and charm to negate it. With no ceremony the last of these six remaining half-cab cew operated buses operating on Leicester City Services were withdrawn from service at Southgate Street Garage on the evening of 31st December 1979
Posted by christopher at 11:03