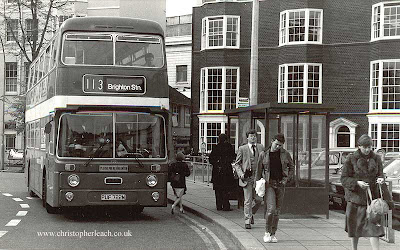 For most of it's years under BET ownership Southdown based on the South Coast was particularly associated with Leyland buses and so when it became a part of the National Bus Company the Atlantean seemed a suitable choice. Unlike other former BET members like Ribble and Northern General who also received these attractive and greatly improved Park Royal bodied AN68's Southdown had no experience of these buses sticking wisely with the trusted front-engined Leyland PD3. Delivery started in 1974 and although a fleet of 47 buses were delivered they were after just a few years moved on to other NBC operators as by this time the Sussex based company had become wedded to Bristol double-deck products once the sole preserve of BTC 'Tilling companies like the local' Brighton and Hove District who had been merged with this it's huge neighbour.
Posted by christopher at 14:42