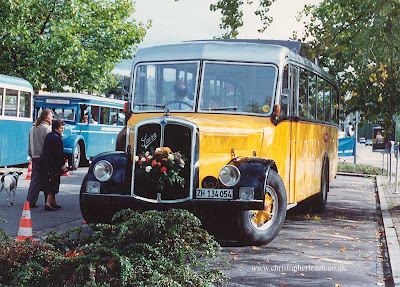 In Switzerland they don't seem to have transport enthusiasts the way we do in Britain. Well I'm sure they do but they're much more low-key and I guess normal, whereas in Britain a country renowned for it's eccentric behaviour bus and train spotters as we call them are largely treated as misfits nutters or worse still degenerates. Of course it's generally pretty stupid people who treat us this way but sadly as a soft target we often get hassled by the police as potential terrorists after we have been spotted by bored surveillance camera operators. It hasn't happened to me many times but now my policy is not to stand anywhere for too long and always slip my camera back into my pocket if a cop car comes along. So refreshing then to go to a country like Switzerland where buses, their fans and their drivers are a valued part of community life. In Britain if you want to do anything out of the ordinary these days you need the right piece of paper because of bureaucratic Health and Safety Laws and a general lack of tolerance, but whenever I've visited PTT Garages not only did they try to understand my bad French and smattering of German often they would tell me where to find buses I wanted to see or offer to get them out of the garage for a photograph. Indeed one of my visits to the area would often cause a bit of excitement and the drivers in quiet places like Triengen would tell one another I was on their patch and at places like Chur and Lugano they came to expect my annual visits and after being challenged the first time just left me alone having told them it was my Uhrlab hobby. One thing we have in common though in both countries is a healthy preservation movement and I spent an enjoyable afternoon amongst old friends in Zurich at bus and rail rally in October 1990. I took an enjoyable ride on this old bonneted SaurerSchnauzen, something I hadn't done since we had P23061 at Chesieres-Villars back in 1965. I should have checked it out but if this was a former Regie example can anyone tell me it's P-number. Thank you.
Posted by christopher at 06:43

Did the Swiss once drive on the left, then?

No they drove on the right but Post Buses uded to have the steering on the wrong side as the divers were in a better position to view the edges of the narrow mountain roads.

Thank you. There appears to be a passenger entrance on the 'wrong' side. How did that work?

This one at least has an entrance on both sides