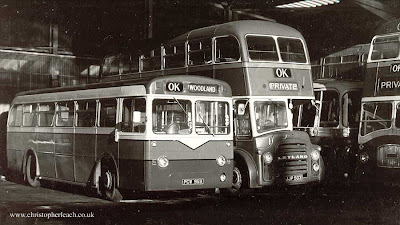 An interesting corner of the OK Motor Services depot at Bishop Auckland with an East Lancs bodied Leyland Tiger Cub that came from Burnley and Pendle and a former Wigan Leyland PD2 with a locally built Massey body. Like Stevenson of Uttoxeter who was also the prominent Independent in it's area this County Durham based concern bought both examples of new service buses including double-deckers and heavyweight coaches but the fleet was very reliant on quality secondhand purchases often bought in batches. Stevenson's never had any former Southdown Leyland PD3 Queen Mary's but OK had several including XUF 847-9 and we can also glimpse the former 848 in this view taken at the beginning of the 80's.
Posted by christopher at 12:36