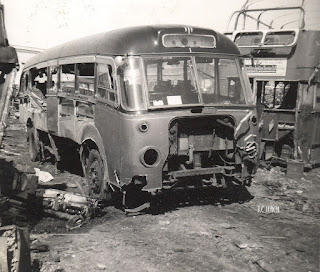 Based in a large old quarry with grand views from the edge of mainly condemned Birmingham City buses,  Bird of Stratford on Avon  was probably the best known of the more traditional muddy scrap yards in Britain before the Yorkshire lads elevated it onto an more industrial scale. But another significant one in the Midlands was here at Stafford where Sid Taylor was well placed to collect the scrap Midland Red buses from the Lichfield dump fifteen miles away. I picked up the old tax disk off 3977 the LA Prototype which had been lying in the dried muddy clay and now wished I had kept it despite being so faded it was hard to read. Probably more worthy of being saved would have been one of these Willowbrook bodied C3 coaches as I'm not sure any are in preservation which is a pity as Black and White of Cheltenham had similar bodies on some AEC and Guy's. But  I think one of the problems was the timber frames rotted away and even some of the BMMO's had been rebdied in 1962 by Plaxton to update the touring fleet for even though not too ugly did look dated.  Although I say it myself, not a bad photo for my very first camera an Ilford Sporty with no adjustments just a viewfinder with point and shoot
Posted by christopher at 03:08

Many thanks for reminding me of my fathers old scrap yard.
He continued collecting Midland Red scrap well into the 1980's and was once stopped with 1 set of trade plates on 10 buses being scrapped at the same time. One plate on the first bus and one plate on the last bus !

Hello this may seem a little strange but I believe I know someone who is looking to get in touch with you, Is this Dave? Please reply asap