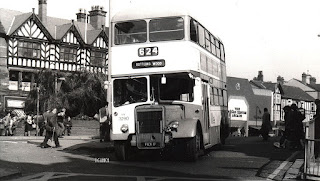 It was no secret that both the earlier Leyland Atlantean and Daimler Fleetline were a load more troublesome than the old half-cabs they had come along to replace. In Lancashire many of the municipals tried to either order just a few of the rear engined buses preferring  to stick to the old order as happened at Wigan. Consequently when it was absorbed into Greater Manchester they inherited a fleet of often not too useful buses including the shorter PD2 like this Massey bodied example and no doubt they continued to work the same old routes but I'm sure the conductors enjoyed a stay of execution.
Posted by christopher at 14:36