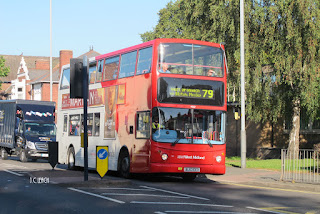 This is National Express West Midland 4552 but when I see these buses I can't help thinking of the old Midland Red as the numbers mirror some of the fleet. 4552 was notable as it was the very last of a series of 200 D7's built in the mid-Fifties but it was not a bus that graced the bumpy Black Country streets as it was a sandiacre St. Leicester bus for much of it's life but it did later move on which included a spell at Digbeth. I'm sure I will rather miss these Alexander-Dennis 400's when they go as they are almost as familiar as the local Metrobuses were in the Wolverhampton area. Their numbers (forgive the pun) have been dented somewhat as Wright bodied Volvo single-deckers have made an impact. 4552 was seen on Wellington Road in Bilston.
Posted by christopher at 23:35