Gosh! It was Twenty-Nine-Years-Ago Today 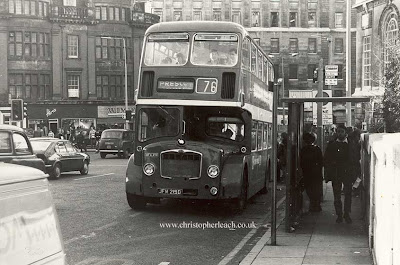 Yes this was 23rd December 1979, I remember the day well as I went into Liverpool City Centre to drop in on a girl friend as it was Carol Ann's Birthday and believe it or not it is today too. But it wasn't a particularly good day for me though as I had been to Liverpool Docks where I reversed at a gatehouse not realising that someone had pulled-up behind me. Even though there was no visible damage the owner made quite a fuss because despite it being the 'old-style' his red Ford Escort was brand new. That was the last time anyone made an insurance claim against me fortunately, but at least I took this great atmospheric photo of one of Crosville's last remaining half-cabs 1966 FS DFG 219 heading for Prescot on the way to St.Helens. Still to be seen in the city at that time were a few of Ribble's full-fronted MCW bodied Leyland PD3's from Aintree Garage which terminated nearby on the routes towards Liverland etc.. All has changed of course which is sad because I was very close to this spot on last Saturday Evening as I was called out to do a rail-replacement bus from all stations from Crewe to Liverpool. By the time I reached Lime Street Station I only had one on board, a guy from Cuba who was playing in an ethnic band that evening. But as I stopped I was quickly accosted by railway officials who seemed somewhat put-out that I should have turned up in a single sixteen-seater LDV minibus when there were about 150 people waiting to get home. I explained we were nothing to do with the local company from that end who had promised to send four full-sized coaches to carry the strike-bound Christmas Shoppers home. So I turned around leaving just 134 disappointed souls standing in the rain.
Posted by christopher at 01:55