Childhood visits to the Ivanhoe 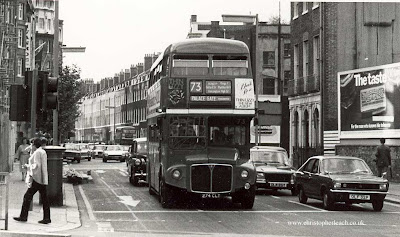 This is something of a sacred spot for me as when we visited London to stay here in the Sixties this is where we would stay at the Ivanhoe Hotel right opposite the British Museum. In those days for young teens like myself it was considered safe enough even as a stranger to explore London alone and it's bus garages on a Red Rover Ticket. After a long day whilst my parents put their tired feet up and took a rest before dinner I would go with my biro and notebook and stand at the end of the street wanting to spot a few more of the 8387 London Transport buses. Indeed on my first visit in 1962 over five days I saw nearly 1500 different buses of various operators here and checking it again appropriately enough the first one I copped on leaving Stafford was Standerwick No.1, a Burlingham -bodied Tiger Cub. On the corner of this Gower Street and New Oxford Street it was a good place to do it as during the Rush-Hour there was a constant stream of buses to spot on the 1,14,24,29,39,73,127,134, and 176 whilst going East was the 19 and 38. Believe it or not they were nearly all RT, RTL or RTW buses as the only Routemasters amongst them were 4XX examples from Highgate Garage on the 127, but nearby in Bloomsbury at the next main junction straying rewarded me with a few very-early RM's in the low double-digit series from Poplar Garage which were going East beyond Aldgate maybe on a variant like the 5B. However it was only a few years and everything had changed quickly reaching the point where gleaming Routemasters outnumbered the to my mind nicer more traditional LTB stock. Some of these RM's were to become favourites with enthusiasts though as Mortlake Garage kept it's Leyland engined examples that only worked two routes including the 73 in tip-top condition and one of them RM 1274 still looked smart and very much at home to me on that same short-trousered-corner in 1979.
Posted by christopher at 02:52