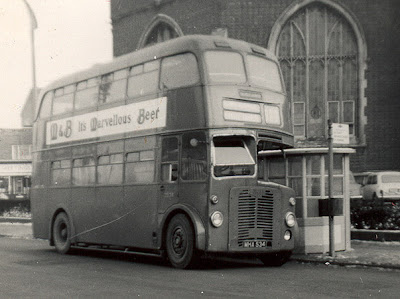 Midland Red at Stafford usually had about five home-built BMMO D5's plus about two more D5B's with closed rear platform and powered-doors. Very few buses stayed at one depot all their lives and in it's fifteen year life this bus had already also seen service at Sutton Coldfield, Redditch and Oldbury. Surprisingly as in those days Stafford only had a token fleet of single-deckers one might have expected to find more new examples of the 200 D5 Family being allocated to the SD fleet of 44, but in fact there was just one D5B No.3832. This probably was because the Garage received a couple of new plus shortly afterwards some still fairly new of the similar looking but 7ft 6ins wide AEC Regent 111 AD2 buses which the more powerful D5's had replaced at garages with more demanding routes. Things worked out alright in the end as in 1953 Stafford received a large number of the first delivery of new lightweight D7 bus to modernise the stock making it about Eight AD2's and Eight D7's. It didn't affect Stafford but history repeated itself as the very nice but heavy doored D5B's had to be cascaded to the more rural fringes too because they were too slow on hilly well patronised routes particularly to the South West of Birmingham to Malvern on the 144 etc..
Posted by christopher at 02:25