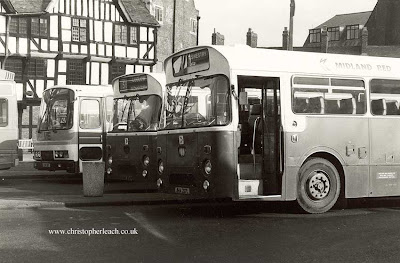 Three coach-seated Leyland Leopards stand in the old Shrewsbury Bus station about to work some of the longer services from the town. In 1986 there were Sixteen of these coach-seated buses allocated here with various styles of bodywork including from the most numerous type, Marshall Nos 217 and 358 bound for Oswestry and Ludlow whilst an ECW example that came from National Travel (NW) 1502 ANA 91Y is going about half-way to Birmingham on what was once the much longer X96 to Northampton.
Posted by christopher at 07:37