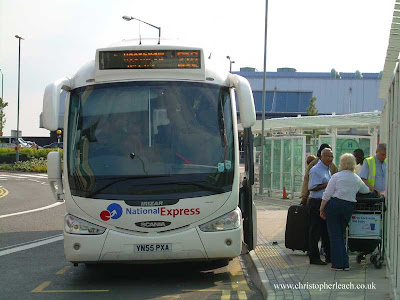 Well I've no idea where this one was going but I was called out again in a minibus to cover for one of these National Express Irizar bodied Scania coaches that broke down on the M6. Actually there was a fault with his windscreen heater and the demister and the driver refused to continue up the Motorway in the difficult freezing conditions. So I got called away from my mug of hot tea, the comfort of my armchair and Top Gear on the television to take the miserable stranded passengers on to North East Manchester. A few years ago I would never have guessed that I would be doing a bus service to bus stations and other old bus haunts from my childhood. I didn't finish till 2.am but at least I got a tip and some Polo Mints for my efforts. They were a nice bunch too.
Posted by christopher at 05:44