Liverpool: A City of Atlanteans 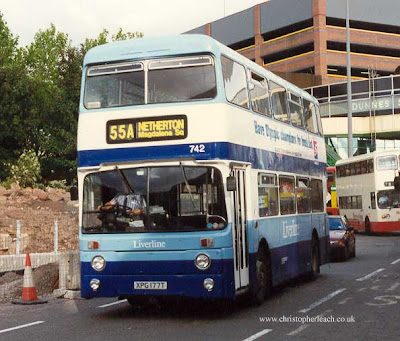 Sadly double-deckers are now very much a minority in Liverpool but once the city roared and screeched with the sounds of the Leyland Atlantean as following the demise of the half-cabs they seemed to dominate the Corporation and Ribble fleets. Once they were either dark green or dark red but with Deregulation they took on a variety of old and revived names and colour schemes including this Liverline bus that might once have been a very typical local NBC poppy-red Ribble Park Royal bodied AN68 but in fact it was new to London and Country in NBC leaf-green as AN 177.
Posted by christopher at 09:56