Tarmac your drive Mister for a Tenner? 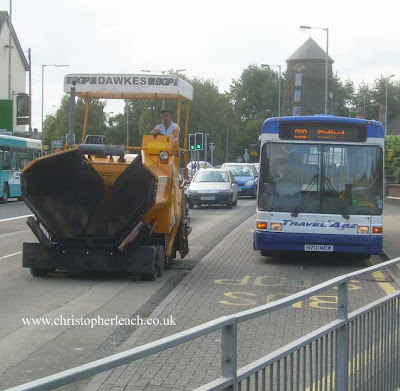 In Stafford if you want a decent job done of your drive you have to go to Dawkes who arrive mob-handed with a whole army of workers plus the odd roller, vibrator and several large yellow lorries with orange warning lights flashing that block most of the normally quiet street and then within a few minutes they're gone again with a good but not cheap job done. It seems you get what you pay for and on the Stafford County Council tendered bus service down the winding country lanes to Codsall I wonder whether someone else will be doing it in the New Year? Indeed after reading that A2Z might completely lose their Operator's Licence I thought I had better upload my digital images just to make sure I had already photographed them on the 880. Reading that this Walsall operator had a maintenance problems did not exactly surprise me as often the buses still in their former colours run in pairs just in case the other one didn't make it or are accompanied by a service van. D & G before them had reliability problems too and their rather tatty buses looked a far cry from the smart green and yellow of Choice who they in turn had bought-out. This service started in the Seventies with a Market Day operation by Warstone's 'Green Bus' as far as Penkridge via Wildwood connecting Acton Trussel. It would be too much to hope for that they might ever do it again and especially as now they run hardly anything bigger than minibuses. Marshall bodied SLF Dennis Dart R701 MEW started life as DMS 1 in the London Northern fleet.
Posted by christopher at 01:24