2008 another bridge: Meet you on the other side 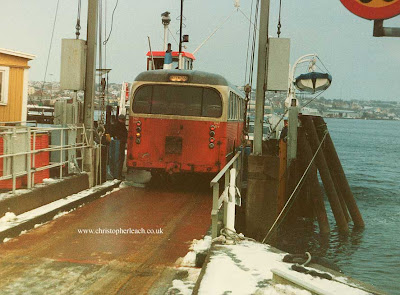 I suppose buses have a working life that is very similar to that enjoyed by our domestic pets like cats and dogs. But whereas in the natural world one generation replicates the last in the bus world at least Darwin's theories on Evolution work faster and with the passing of each generation of vehicles we are left feeling nostalgic and a bit sadder as a bit of their life-blood gets drained away. Maybe it's just not that the newer bus don't seem so interesting but just as likely we feel we've lost something too of ourselves as those years went by. Maybe it was the world where we had more hair picked up girls, people didn't need to lock their doors or when the quickest way to get the mainland was by ferry. I'm not certain where this was taken in Sweden but it is to the north of Gothenberg maybe Lysekil, a place we pronounced Leezasheila. As for the delightful little ferry which the SJ bus No.0417 boards it might well have been replaced by a magnificent concrete bridge by now, but I sure hope not.
Posted by christopher at 03:18