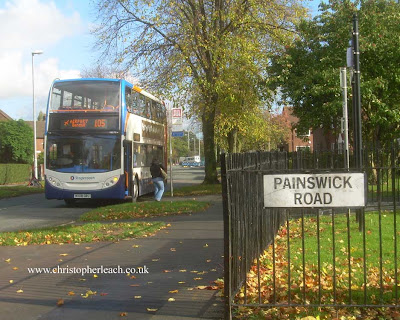 At one time not so long ago it seemed the British double-decker was doomed but thankfully their numbers are increasing again in both our large cities and towns. The large groups particularly Stagecoach tend to allocate the new ones to it's busiest areas like Manchester cascading older buses in turn to quieter places like Exeter. Here a still new 08-Series Alexander-Dennis double-decker passes Painswick Park in Wythenshaw but seems to be going in the opposite direction to the Airport. Maybe this is the reason why he doesn't want his face to be seen, a trait more usually found with the rather surly First Group crews..
Posted by christopher at 01:01