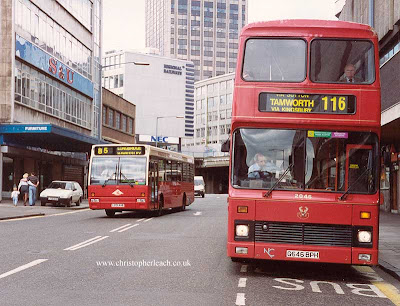 Under Bagerline ownership Worcester based Midland Red West deliveries comprised firstly the Leyland Lynx and then another common bus for the Group as a whole, the Plaxton Verde bodied Dennis Dart. Drawline on the other hand which owned Midland Red North based in Cannock preferred to shuffle it's older buses around like these Northern Counties bodied Volvo double-deckers that previously worked on London's tendered routes for London and Country based at Catford. At this time MRN was trying to emulate the traditional Midland Red image but not only did they get a too dark and dull shade of red the paint itself was of poor quality and it was in every sense a pale limitation of the still much missed real thing. However these two liveries still have more character and charm than the corporate look of First Group and Arriva, especially Midland Red West which was rather smart .
Posted by christopher at 03:19