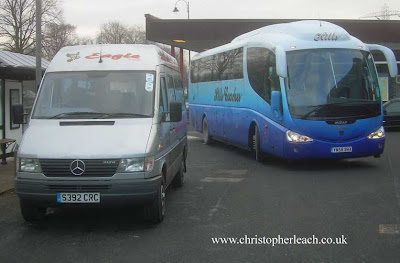 No doubt many of you will have heard about the tragic accident when a light aircraft crashed into the electric cables of the main North West Line at Colwich killing the three occupants. I was called out to help move people from soon after it happened on Friday lunchtime till Sunday Evening when the railway line was finally cleared for service. They say every cloud has a silver lining and going home after working a long bitterly cold weekend I was relishing the prospect of some extra pay but my satisfaction was short lived as engine oil was gushing out of my diesel engine and my poor old Peugeot 2o6 ended up dead at the side of the road. It had only done 41.000 miles so it's rather a shame as now it only seems good for scrap after just nine years. Still it's given me an excuse to treat myself to that classic frog-eyed Mazda MX5 I've been pondering the last year or so. I just hope the bright red I.8i gives me same sensations of speed as does our Mercedes Sprinter with the Turbo. Whilst I was carrying odd lost souls to places like Stone and Rugeley, large coaches like this Iriszar bodied Scania of Hills Coaches from Wolverhampton was running between the main stations.
Posted by christopher at 10:11

Sorry to here about your misfortunes, Christopher. Those things always happen in the worst possible moment.

Anyway, thanks for the wonderful pictures, and keep it up.