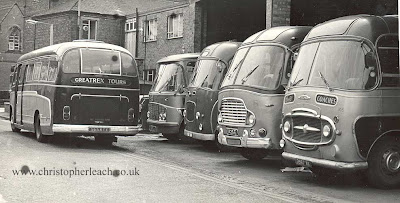 As a bus enthusiast it's so easy to completely overlook the mundane, and I'm no less guilty than anyone else in this respect. However maybe when using up a film I ventured to snap some of the less interesting local buses too. Thankfully in about 1969 I took this now rather interesting line-up of Greatrex Tours rather mundane older stock. One of you left a message asking if I had any former buses from H.Nicholls and Sons of Milford. Well the two buses at the far end once belonged to them, LRE 345B a Harrington Bodied Bedford SB5 bought new and another Bedford this time with a bus body by Plaxton that came from I think Trimdon Motor Services. In fact the only bus delivered new to Greatrex was the Duple bodied Commer 8425 E.
Posted by christopher at 08:39

Thanks Chris for digging this one out. I used to regularly travel on the Nicholl's buses so the photo certainly brings back memories. Thanks for the time and efforts you must put in adding images onto your site. They are appreciated. Wes.

Thanks for your comments Wes it helps to make it seem more worthwhile. I live in the Tixall Road so the red and brown Nicholls buses would have trundled passed here. I have some fine memories of Staffordian's Leopards and the odd Ford and of course Leopards and Tigers of MRN. Shame Arriva is so dull, I just walk back from town these days