I keep thinking I'm in Switzerland 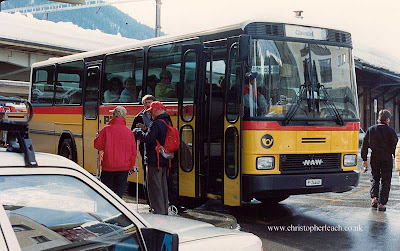 A light aircraft crashed near my home at Colwich sadly killing the three occupants. But this has meant a busy weekend for me as one of my jobs is doing rail replacement work mainly sorting out the stragglers with my minibus. It hasn't been too boring as I've been able to nip home for the odd cup of tea but it's been bitterly cold hanging around stations, that dry deep penetrating cold I remember from my hours getting on and off trains in Switzerland. One place I really miss is Davos with it's crisp snow and for me often allusive Post Buses. The Garage here had a few of these quite attractive NAW BH 4-23 buses. Even though they were basically a Mercedes badged as Swiss and marked the end of true Swiss bus manufacturing they hold a certain affection with enthusiasts as they looked the part alongside the other more blatant Euro-Boxes. I managed to see all of then except one P24434 from Uznach Garage which was sold off early to a PAH in Ilianz without me knowing where it had gone.
Posted by christopher at 02:25