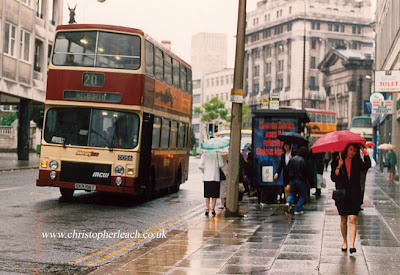 In it's final days before being bought out by Arriva who returned the buses to a kind of green, Merseybus turned the clock back to before the war and reintroduced this distinctive maroon and cream livery which looked quite good and even in the rain. Most MCW Metrobuses were bodied by MCW but a minority also carried Alexander bodywork like 0056 bound for Aigburth in the early Nineties.
Posted by christopher at 02:09

One thing that strikes me in this picture are the concrete flagstones. Many of these were put in in the 1970s I guess when they must have looked very modern. Many have gradually been replaced by asphalt, or at least many of the locations that I remember having had them have either lost them or are now looking very tatty through patching up.

In recent years interest in street architecture has been revived and councils are taking more care to make streets (at least in central areas) look more attractive, and so there is some departure from teh cheap fix approach of the 1980s.

I was wondering, will we ever feel nostalgic about some of the older things? The urban quality of the buildings in thsi photographs is undisputable and they are probably listed and protected. But who protects the smaller things such as flagstones, letter boxes, bus stop shelter or road signs. I'm not in favour of turning the clock back or creating some sort of a museum, but how about dedicated conservation areas?

I'm inclined to agree with you but the problem is when councils try to make town centres more attractive again they put in repo-Victorian junk in it's place. For too long our streets have been turned into characterless sewers for cars to flush down and the pedestrians are just the unwanted rats who don't belong. LOL