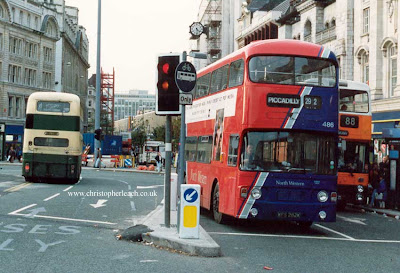 Things are much more stable now on the bus front now that consolidation in the bus industry is more or less complete. But the late Eighties and the Nineties were interesting times with all sorts of operators both big and small having a go. These two operators ended up as part of Arriva but the former Crosville Bristol VR with the broken brake-light was part of C-Line whilst the North Western Alexander bodied Atlantean is quite interesting as it formerly ran for Edinburgh's Lothian. In the background work was being carried out on Manchester's new tramway, one of the few things that has had some real merit following all this upheaval on the buses.
Posted by christopher at 02:43