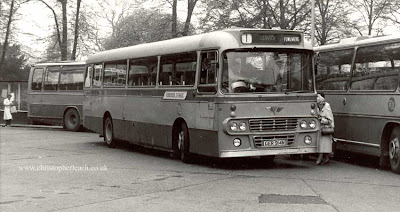 As well as of course Scotland where it was ubiquitous, the Alexander Y-Type generally couldn't be found with operators south of the River Trent with the exception of Stratford Blue that bought a Leopard. The one big exception though was Premier Travel who standardised on this type of coach for it's dual-purpose needs. As always they were mounted on the AEC Reliance chassis and one is seem at Dummer Street Bus Station in Cambridge with later Plaxton bodied examples in the backround.
Posted by christopher at 02:24