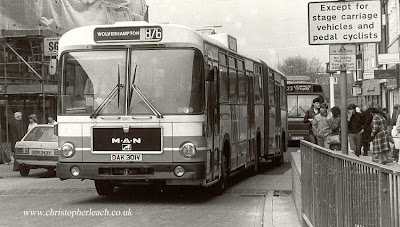 I think amongst the most unlikely buses to operate into Stafford was when the local NBC bus company Midland Red North received five 1979 MAN articulated or bendibuses and operated them from nearby Cannock. They also worked on the 876 Service to Wolverhanpton which was operated by the same Garage. Originally they were bought for trials in Sheffield alongside DAB's.
Posted by christopher at 16:34