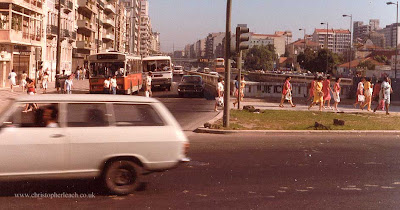 Some photographs are obviously flawed and it's so easy to just throw them away but sometimes that can be a big mistake. Take this image for instance taken in Lisbon when I was there in July 1984 for when it is enlarged it captures both the feeling of heat and that evening's frantic activity. As for the car moving across the shot it doesn't really spoil the view and acts as a counterpoint to the rest of the traffic trailing off in to the distance. The photography manual tells us there is a right and wrong way to do things, read it by all means, but don't be afraid to experiment as without it there would be no progress.
Posted by christopher at 06:44