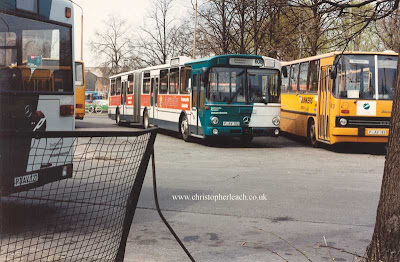 After Reunification the former East Germany which had long been starved of investment cried out for modernisation, and as far as buses were concerned as well as buying new machines second-hand purchases played an important part too such as here at Potsdam where some Mercedes-Benz articulated buses helped replace the once ubiquitous Hungarian Ikarus.
Posted by christopher at 06:18

Cityscape seems a good subject for murals. But many themes can of course be painted there, for decoration and as a break and escape from looking at cement. This painting by American painter Charles Sheeler, http://EN.WahooArt.com/A55A04/w.nsf/OPRA/BRUE-8DP5GS, would make a good mural as it is as a good painting. The image can be seen as wahooart.com who supplies canvas prints from original art.