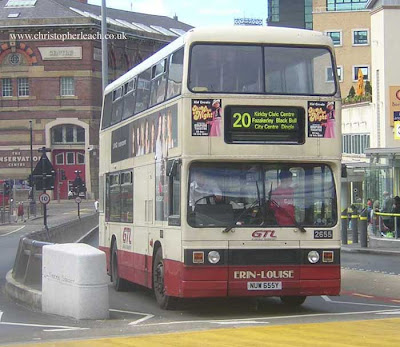 I've been loosely following Saint Valentine's themes this week and with the exception of photographing them as they go by, what better way could there be to celebrate them than name your favourite bus after one. Well maybe not but naming buses after children was one of the nice quirks to be found on the vehicles belonging to GTL in Liverpool. This company was formed when Arriva was told to sell it's Gillmoss Garage and buses to a competitor because it now had close to a monopoly in the city. Arriva had dramatically pruned it's double-deck fleet and as being fine old buses a fleet of mainly former London Transport Leyland Titan's added some much needed interest to streets that once echoed to the sounds of the Atlantean.
Posted by christopher at 07:11