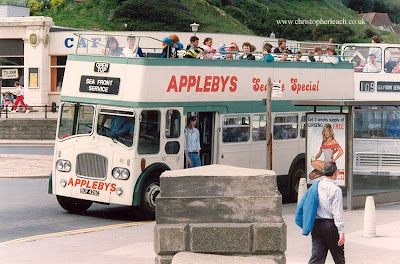 If buses like racehorses were to be judged by their pedigree this Northern Counties bodied Leyland PD3 would be judged to have come from a pretty good stable. The impartial probably agree that Southdown was the Premier BET group operator with it's large splendidly turned out coach fleet and smart solid double-deckers like the Queen Mary. Amongst their ranks were thirty buses that could become open-toppers in the Summer and like other sea-front buses of this type examples were to enjoy extended lives not just with the Sussex operator but elsewhere too like twenty-five-year-old 1965 former 425 which was seen working on the sea-front at Scarborough with Applebys.
Posted by christopher at 01:11