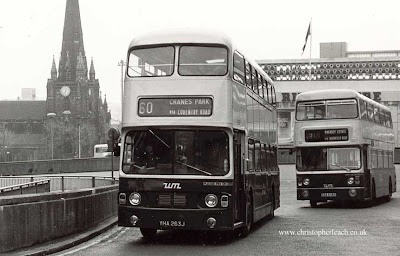 Two of the once vast fleet of West Midlands PTA's Daimler Fleetlines negociate the Bull Ring Roundabout in the centre of Birmingham. 1978 built MCW bodied No.6648 was fairly typical of the later buses but 6263 was rather more interesting. This Alexander bodied example came to WM along with their services and garages in the PTA area which included Midland Red's profitable densely populated heartland called the Black Country. Once with a dual-entrance but still carrying it former number 6263 came from the final batch of 33 of these D13 Fleetlines delivered in 1970-1 and as most of them had been allocated here and to garages like Sutton Coldfield the vast majority ended up in the PTA's not unattractive dark blue and cream.
Posted by christopher at 02:11