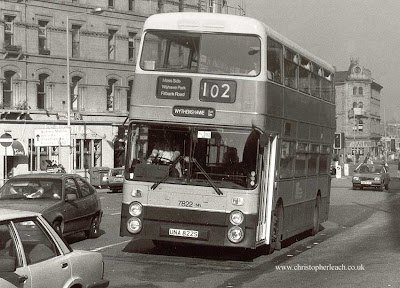 Partly because it owned Northern Counties the bus body-builder many of the Greater Manchester Transport buses carried NC bodies including of course most of the Atlanteans and all the Olympians. It was easy to spot the Park Royal bodied Atlanteans though as they had well-rounded front domes whereas NC bodies were more box-like. Some of my negatives turned out rather cloudy and fogged but the effect was not always too unpleasant maybe just losing some background detail. No 7822 from the long since closed Northenden Garage (NN) makes it's way along Deansgate before as it heads for Moss Side and Wythenshaw Estate to the south of the city.
Posted by christopher at 07:10