We're off to Clacton 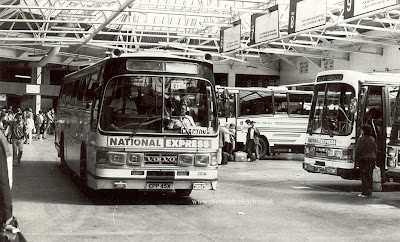 National Express
A busy scene at London's Victoria Coach Station as a 1982 Duple Dominant coach bodied Volvo B10M leaves for Clacton on Sea on the coast of Essex. Also in view is a National Travel (Black & White Motorways) Leyland Leopard also bodied by Duple and in the background a Plaxton Paramount bodied Tiger of National Welsh. It seems strange that whenever one tries to use the National Express website wanting to go to London they seem to give you a list of seemingly everywhere in the Capital except Victoria Coach Station where the coaches terminate.
Posted by christopher at 02:47