To Llandudno with Barton 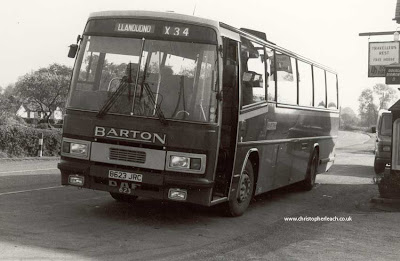 Barton as an Independant was know for running a very mixed fleet but few would associate it with DAF or any other non-British manufacturer come to think of it. But towards the end in 1983-5 it bought batches of these Plaxton Paramount 3200 bodied vehicles rather than the previous choice Leylands. No doubt unlike the much loved Leopard it was obviously not so impressed with the later Tiger only taking one batch of five. The first of the 1984 DAF order No.623 is pictured halted outside the appropriately named travellers Rest on the road between Nantwich and Chester as the vehicle makes it's way to the Victorian seaside resort of Llandudno on the North Wales Coast on Express Service X34 when the coach was still fairly new.
Posted by christopher at 03:08