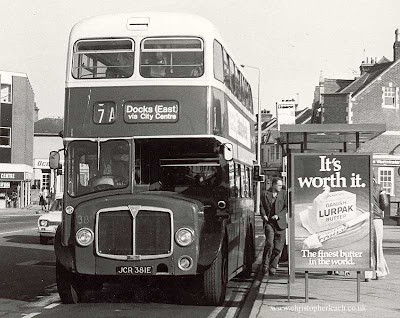 One of my favourite UK Municipal Operator was Southampton City Transport who unlike most of the others did not abandon the fine traditional livery of maroon and cream, or to be more precise a kind of darker cherry red that so suited it's older buses when it introduced a new brighter look when it's first Leyland Atlanteans arrived in 1969. Consequently not only did the original look of quality carried on fine buses like 1967 No.381 an East Lancs bodied AEC Regent V stay with them throughout their working lives it also meant that the later stock always looked fresh too. This shot was taken at Shirley on the outskirts and to testify that it was taken in the Seventies, just look at those flares!
Posted by christopher at 11:18