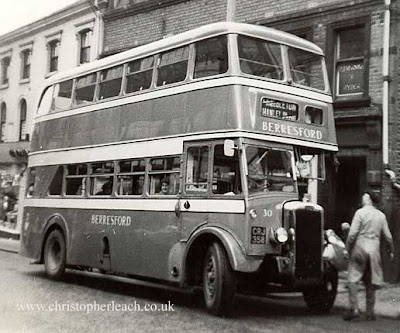 Berresford of Cheddleton in North Staffordshire did push the boat out a bit with some adventurous and not too clever purchases like an ex-Bury Guy Wulfrunian but this solid reliable ex-Salford MCW bodied Daimler was not one of them. Most people associate this operator's buses either with either being on or just about ready for their slow demise dumped at the back of the garage in what became Britain's best known bus graveyard. This old girl obviously had a few good miles left as I caught what had been Salford No.358 fresh out of the paint shop as the driver had an oily rag to polish the chrome up on the radiator ready for a somewhat regal return journey to Leek. This view was taken in Hanley in about 1965 when this one of many similar buses delivered to Salford was fifteen-years-old.
Posted by christopher at 05:43